By Läkemedelsmarknaden - Pharmaceutical Market Newsletter - May 17, 2016

This article was translated from Swedish. See the original here.

Denmark is the main market in Europe that is most open to innovative medicines. Sweden comes in fourth place, after Germany, the runner-up, and third-place Belgium. It is illustrated by a ranking of IMS Health made in 2014, based on the comparative figures for the period 2010-2014. The statistics are based on the amount of money invested in innovative medicines per capita.

Lithuania, Latvia and Romania are at the bottom of the ranking. 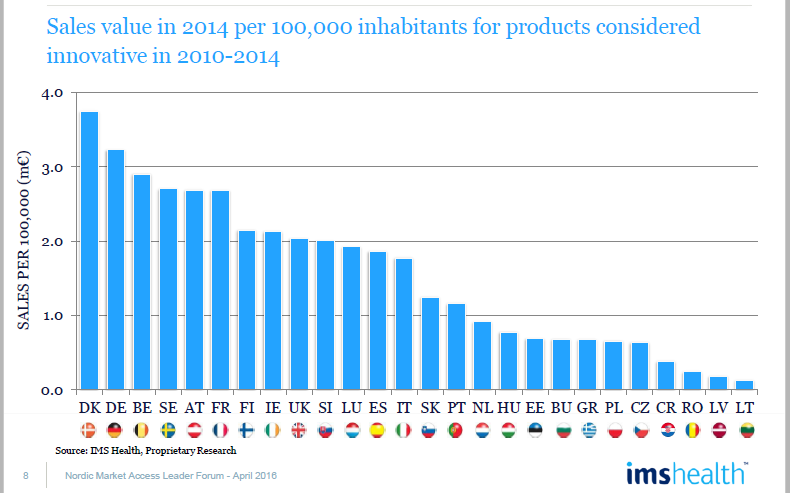 “Our analysis shows clearly that there are very large differences in the uptake of innovative medicines in the 25 countries we have compared. It also shows that the financial crisis dramatically decreased uptake in, for example, Spain and Italy,” - commented Carlo Ciapparelli, president of IMS Health in Northern Europe region at the Nordic Market Access Leaders Forum 2016, organised by NextLevel Pharma in Stockholm in April.

Spain dropped in the ranking from the third position in 2010 to the twelfth in 2014.

The interest in innovative pharmaceuticals in the Nordic countries, according to IMS Health statistics, is relatively unaffected by the financial crisis.

“The Nordic countries' investments in innovative pharmaceuticals remained at about the same level in the years following the 2008-2009 financial crisis, and it meant that their investments in the rankings improved,” - said Carlo Ciapparelli.

“We invested almost €4 million per 100 000 inhabitants in innovative medicines in Denmark in 2014. The corresponding figure for Sweden was about 3.7 million, according to IMS Health statistics” (see the graphic illustration below).

IMS Health did the analysis of the uptake of innovative medicines in the different European countries for the first time in 2009, in connection with that Belgium had the presidency of the EU. The analysis was based on data from the company's existing sales.

The article was prepared based on participation at the Nordic Market Access Leaders Forum organized by NextLevel Pharma - the meeting was attended by Swedish, Nordic and international experts in the pharmaceutical industry, both from the public sector and the business community.

This article was provided by Läkemedelsmarknaden - Pharmaceutical Market Newsletter